Have you ever been in a conversation with your spouse and they said something to you that made you believe there was more behind what they just said than the words that were used?  While doing marriage counseling at my office in O’Fallon MO, I had a couple recently that were discussing chores around the house.  They were trying to figure out how to create more balance in their lives and in their marriage.  Both of them work full time jobs and she felt like she was doing more of the work and wanted his help.  Here’s how it went: 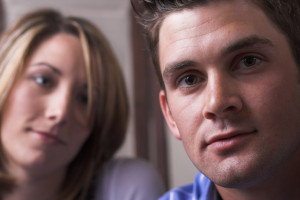 Her: I’m going to need you to start helping more around the home

2) I don’t do enough around the house

4) I can’t win, this will just give her more to complain about

What we hear is skewed or influenced by our past experiences as well as our expectations of the purpose of the conversation.  So, what I’m saying is we hear what we expect to hear, even if it isn’t exactly what said.  It’s been said the we should listen to “seek first to understand” rather than just making a negative assumption about what was said.  If you don’t know the meaning behind what is being said, just ask, don’t assume.

One way to ask meaning is to say “What I heard you say was…”, or “when you say…it makes me believe…is that what you meant?”  When we seek to understand rather than just assuming the worst case scenario, we can create an atmosphere of cooperation in our marriage and reduce a lot of stress.

If this sounds familiar, call the office and schedule an appointment to learn to communicate better with your spouse.